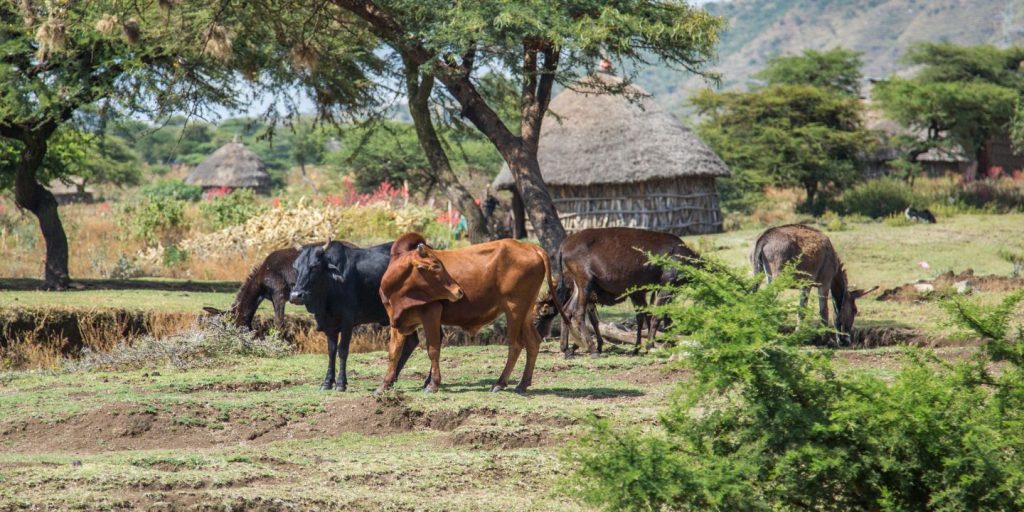 Best time to go:  October – May

Ethiopia is a mystery in Africa, combining a long history, a kaleidoscope of cultural influences, and extraordinary geographic diversity. The highlands’ impressively preserved Orthodox Christian legacy has endured for millennia, standing out among the neighbouring African tribal cultures and Islam. It is undoubtedly a land of extremes, ranging from the vibrantly chaotic sprawl of the capital Addis Abeba and the mediaeval castles of Gondar to the serene island monasteries of Lake Tana. This trip includes a hike through the Simien Mountains to experience highland life and time to visit the most impressive ancient churches and monasteries that house works of art and religious icons, such as the breathtaking rock-hewn chapels of Lalibela and the prehistoric obelisks of Axum. As we examine Ethiopia, the only nation in Africa to have avoided colonialism, it is clear that the country has a tremendously diverse ethnic population and vibrant traditions.

The third-highest capital in the world is Addis Abeba. Located on one of the highest points of the Entoto mountain group at 2,400 metres above sea level.

We take our time and have lunch outside while touring the city. We are going to the National Museum, which is where the renowned Lucy fossil of an ape is kept, and the Addis Abeba University’s Ethnological Museum (housed in the former palace of Emperor Haile Selassie).

Take a one-hour, on-your-own-cost flight from Addis Abeba to Lalibela, which is 2,600 metres above sea level and located on the Ethiopian plateau. The city is home to 11 monolithic churches that were fashioned out of the local pink basaltic scoriae rock in the 12th century and are now recognised as UNESCO World Heritage sites.

devoted to touring the city and a monastery on a hill. Lalibela is surrounded by a number of mountains with flat tops; the distance in elevation between the city and the airport, which is located farther out, is 1500 metres. A trip to the Asheton Maryam Church, located approximately 7 kilometres outside the city, is scheduled for this morning. After a short drive, it takes three hours to walk or ride a mule (3150m) to get to the monastery proper. There are some hilly parts of the walk (done at own risk and own expense). We’ll stop by the market in the afternoon, where a colourful assemblage of locals congregates.

Fly to Axum, also spelled “Aksum,” in around 45 minutes at your own expense. Axum, which is thought to be the oldest city in Ethiopia, is renowned for its large, towering sculptures and enormous granite pillars that date back more than two thousand years. All Ethiopians revere this historic city as the location of the Ark of the Covenant, and it has a history of traders, wealth, and intrigue dating back to the period of the Queen of Sheba (10th century BC). This afternoon, we visit churches hewn out of rock and other historical sites to learn more about this past. The Churches of St. Mary of Zion comprise the nation’s holiest Christian sanctuary. The site includes a museum, an old and a new church, but the most important structure is a little chapel that is regularly watched over by monks. This chapel is supposed to be the location of the Ark of the Covenant, which Moses transported from Mt. Sinai in Egypt and which contains the tablets on which he wrote the Ten Commandments; only one carefully selected custodian is permitted access to it.

Simien is the Amharic word for north. The mountains were a massive volcanic mass six hundred million years ago. One of the world’s greatest sculptures was made as a result of deep fissures being cut into them by rain, ice, and rivers. Peaks, canyons, gorges, clefts, and pointed, amethyst-colored pinnacles that resemble obelisks create dramatic panoramic vistas in the breathtaking landscape. We get the chance to explore the area on foot and appreciate the mountains’ incredible splendour. We can try to see some of the endemic fauna in the area, which includes numerous monkey species.

The Ethiopian kingdom, which began in 1632 with the reign of Fasiladas, originally had Gondar as its capital. With its fortified Royal Enclosure, Gondar has grown to be one of Ethiopia’s largest and most impressive cities. Over the period of 236 years, a dozen castles built by various emperors have been located in Gondar. The city has Islamic influences and a more European than African appearance. We will tour Fasilidas’ castles, homes, baths, as well as the fortified church known as Debre Berham Selassie (Light of the Trinity), which is perched atop a hill and encircled by defensive walls. Beautiful frescoes cover the inside.

Travel by car to Bahir Dar, one of Ethiopia’s best-planned cities. It is situated on the shores of Lake Tana, the largest lake in the nation, and is 1,800 metres above sea level. We’ll go on a city tour this afternoon.

For a better understanding of the enormous immensity of this river, take a boat ride on Lake Tana. The islands are home to numerous monasteries and churches, some of which are private and inaccessible to the general public. We will go to the magnificent frescoed Ura Kidane Mihret church on the Zeghie peninsula with its lengthy history. We travel to Tissisat in the late afternoon to see the Blue Nile Falls, also known as “Smoke of Fire.” The journey to the falls from Bahir Dar takes around two hours (on a bumpy, sandy road), but the reward is worth it. The Falls span a gap that is more than 45 metres high and 400 metres broad when it is flooded.