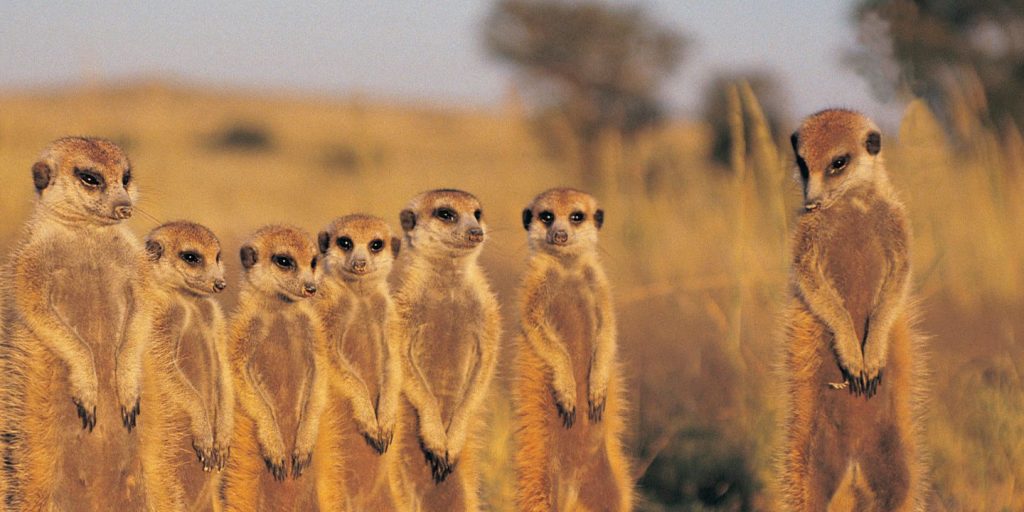 Best time to go:  May – October

Zimbabwe is a country with amazing natural beauty, friendly people, and a rich cultural heritage, but for years its political instability kept it from being one of Africa’s top safari destinations. But now that the nation has moved past its conflict and is reestablishing balance, it is reemerging as one of the continent’s top travel destinations. One of the seven natural wonders of the world, Victoria Falls is also called as “The Smoke That Thunders” by locals. The sheer force of this enormous amount of water crashing into the Zambezi Gorge is breathtaking and unforgettable. A kayak trip down the Zambezi through the Mana Pools National Park will appeal to the adventurous traveller, providing up-close encounters with crocodiles, hippos, and a variety of other wildlife. Lake Kariba, with its game-rich shores and islands, is an idyllic safari spot with mind-blowing sunsets. Hwange National Park is known for its enormous herds of elephants.

One of the most magnificent waterfalls in the world is Victoria Falls. The stunning Zambezi River, which forms the border between Zambia and Zimbabwe, is where it is situated. From the Zimbabwean side, it is simple to visit and admire these magnificent falls. Victoria Falls, which is thought to be the world’s biggest waterfall, is an amazing 1708 metres wide. The nearby tiny town of Victoria Falls makes an excellent starting point from which to explore the various things that this part of Zimbabwe has to offer. Adventure fans can engage in a variety of high-adrenaline activities in the neighbourhood. Scenic flights, microlighting, white-water rafting, bungee jumping, kayaking, and once-in-a-lifetime adventures into the spectacular Chobe National Park are just a few of the fantastic things that visitors can look forward to.

Botswana, a country in southern Africa, is well known for its pristine wilderness areas, which are characterised by deep lagoons, wetlands, lush palms, rocky hills, and arid plains. The Okavango Delta, the biggest inland delta in the world, and the enormous red expanse of the Kalahari Desert are without a doubt the country’s main tourist attractions. An wealth of African species can flourish in this quiet haven created by these natural treasures. The magnificent Makgadikgadi Salt Pans, the Savuti Plains, which are home to a sizeable pride of lions, and the Tsodilo Hills, where 4500 rock drawings offer a unique record of human presence spanning many millennia, are just a few of the other highlights.

The Chobe River serves as the park’s northern boundary, and it is known for offering a wide variety of animal viewing possibilities. The Chobe River Front promises up-close interactions with a variety of African species because of the park’s dense concentration of animals, which includes populations of elephant and hippo. However, the waterways also draw big herds of buffalo and the lions that hunt them. Visitors may anticipate a variety of thrilling experiences, including motorboat rides, 4WD along the banks, and observing uncommon bird species. Hire a houseboat for an exclusive, luxurious safari experience.

One of the most stunning reserves in Africa is Moremi Game Reserve, which is located east of the Okavango Delta. Its natural wilderness extends over 4871 square kilometres, and its varied topography includes grasslands, flowing creeks, and deep woodland. Large herds of buffalo, wildebeest, and zebra, as well as the uncommon sitatunga and lechwe antelope, lion, cheetah, and packs of wild dogs in the open grasslands, are all supported by the ecosystem’s diversity. The majority of the 550 bird species listed on Botswana’s national bird list are among the abundant wildlife. Visitors can explore this slice of paradise from a variety of opulent lodges in the reserve.

The Moremi Game Reserve’s northern border is where the Okavango’s Khwai region begins. Due to the unfenced borders of the Khwai Community Area, wildlife is able to travel between the forests during the rainy season when there is an abundance of water and return to the permanent rivers and lagoons during the dry season. With the unique benefit of being a private concession, the Khwai region provides the same wildlife experience as the Moremi Game Reserve and allows for night drives and walking safaris. Don’t pass up the chance to take in the stunning scenery, spot a variety of wildlife, and relax.